In this Auger Tutorial from EAG Laboratories, we present the history of Auger, as well as the scientific principles behind the instrumentation, theory and data provided by this analytical technique.

In 1923, Pierre Auger discovered the Auger Process and Auger electrons while irradiating samples with X-rays. The idea of using electron-stimulated Auger signals for surface analysis was first suggested in 1953 by J. J. Lander. However, it wasn’t until 1967 that Larry Harris demonstrated the use of differentiation for enhancing the Auger signals. This development provided the necessary sensitivity for useful measurements. Early differentiating instruments used analog circuits and lock-in amplifiers to provide differentiated spectra directly, but more modern instruments acquire electron intensities directly and use computer Display Algorithms to provide differentiated spectra. Today Auger electron spectroscopy is the most frequent analytical method for surfaces, thin-films, and interface compositions. This utility arises from the combination of surface specificity (0.5 to 10 nm), good lateral surface resolution (as little as 10 nm), periodic table coverage (except hydrogen and helium), and reasonable sensitivity (100 ppm for most elements). 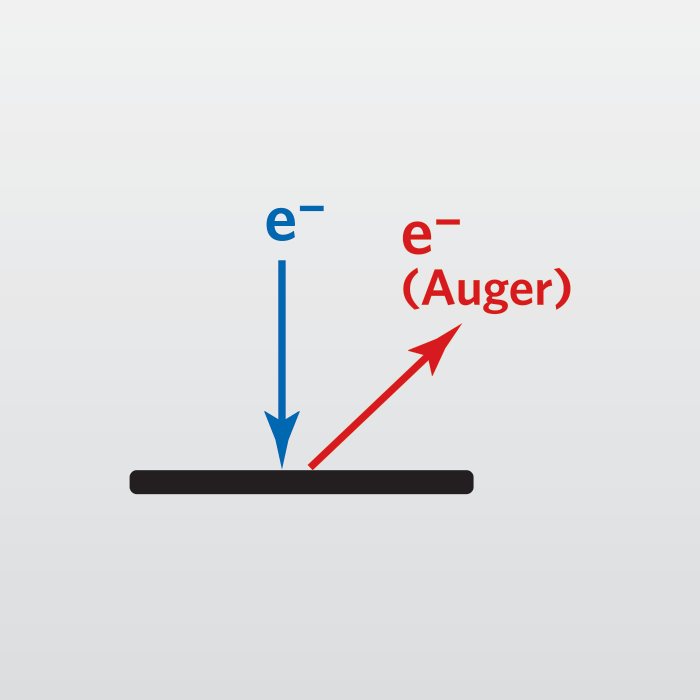 Electron energy analyzers measure the number of ejected electrons as a function of the electron energies. The analyzers must be located in a high vacuum chamber and isolated from stray magnetic fields (including the earthís) that deflect electrons. Past Auger spectrometers used several types of electron energy analyzers, including spherical sector and cylindrical mirror analyzers. However, modern instruments nearly always incorporate cylindrical mirror analyzers because their high transmission efficiency leads to better signal-to-noise ratios. The schematic shows a cross section of a cylindrical mirror analyzer in red. The primary electron beam hits the sample surface at the source point of the analyzer. Auger electrons move outward in all directions and some pass through the grid covered aperture in the inner cylinder. A variable negative potential on the outer cylinder bends the Auger electrons back through a second aperture on the inner cylinder and then through an exit aperture on the analyzer axis. The energy of transmitted electrons is proportional to the voltage (-V) on the outer cylinder.

Three kinds of primary electron sources are in common use in Auger electron spectrometers.

Auger instruments have primary electron beam columns similar to electron microscopes. The columns may include both electrostatic and magnetic lenses for beam focusing as well as quadrupole deflectors for beam steering and octopole lenses for beam shaping.

Auger instruments have primary electron beam columns similar to electron microscopes. The columns may include both electrostatic and magnetic lenses for beam focusing as well as quadrupole deflectors for beam steering and octopole lenses for beam shaping.

Displaying Auger spectra as differentials enhances the sharp Auger peaks and deemphasizes the relatively intense and structureless background. Strong interfering signals accompany the Auger electrons in all regions of the Auger spectrum. The interference includes contributions from secondary and backscattered electrons, and from Auger electrons that have lost energy as they escape from beneath the sample surface. The first figure shows a typical Auger spectrum (of iron) plotted as total electron signal, N(E), versus electron energy. The Auger peaks are obscure even after expanding the vertical scale.

Scanning electron microscopy (SEM) instruments and Auger spectrometers use similar primary electron columns. In fact,SEM capabilities are usually incorporated into Auger instruments. Separate detectors are required for secondary and backscattered electrons. To produce images, these electron signals are measured as a function of primary beam position while the beam is scanned in a raster pattern over the sample.

The backscattered electrons are usually measured with a solid state detector located on the primary beam pole piece. The detector consists of a diode with a thin gold conductor across the front surface. Backscattered (but not secondary) electrons have sufficient energy to pass through the front surface and produce electron hole pairs which produce a current in the diode.

The sample is bombarded with an electron beam in electron probe X-ray microanalysis. The X-rays formed in competition with the Auger process serve as the measurable signal. Two kinds of X-ray detectors are in wide use. Energy dispersive spectrometry (EDS) relies on semiconductor detectors, usually lithium drifted silicon. The EDS detector converts the X-rays into electron-hole pairs by inelastic scattering. The principle of operation is similar to the surface barrier detectors used in RBS. Wavelength dispersive spectrometry (WDS) depends on Bragg diffraction of X-rays incident on a crystal. Any X-ray wavelength can be selected by adjusting the crystal angle and/or changing the crystal to provide different diffraction plane spacing. The two detectors are complementary.

The EDS system detects all X-ray energies simultaneously and accepts a wide solid angle of the X-ray emission. Thus, EDS is faster and better for survey spectra when the sample is totally unknown. The WDS system provides higher energy resolution, useful for separating overlapping peaks. Furthermore, bremsstrahlung contributes less background to the narrower peaks. In addition, WDS detectors accept a wider range of signal intensities. The WDS system is useful for mapping the locations of specific elements over a sample surface and for elemental quantitation down to the 100 ppm level.

Although both are dated, two good reference book are:

The basic Auger process starts with removal of an inner shell atomic electron to form a vacancy. Several processes are capable of producing the vacancy, but bombardment with an electron beam is the most common. The inner shell vacancy is filled by a second atomic electron from a higher shell. Energy must be simultaneously released. A third electron, the Auger electron, escapes carrying the excess energy in a radiationless process.

When the electron beam strikes a sample surface, it produces a plethora of different interactions. Elastic scattering occurs when a high energy electron (1 to 30 keV) strikes a sample atom and recoils with essentially all of its energy. (The RBS kinematic factor equation applies to this situation and indicates an energy loss of 1 eV for a 25 keV electrons striking a surface iron atom and scattering back at 180 degrees.) The electron beam loses energy as it passes through material, thereby broadening the energy distribution of backscattered electrons. Inelastic scattering occurs by several mechanisms as the primary electron gives up larger amounts of its energy.

Electron beams disperse into small volumes, typically about one cubic micron (1e-12 cc). X-rays are emitted from most of this volume. Auger signals arise from much smaller volumes, down to about 3e-19 cc. The X-ray analytical volume increases with electron beam energy and decreases for materials with higher atomic numbers. The Auger analytical volume depends on the beam diameter and on the escape depth of the Auger electrons. The mean free paths of electrons depend on their energies and on the sample material. The minimum mean free path (~0.5 nm) occurs at about 80 eV. Under practical analytical conditions the mean free path increases to as much as ~25 nm.

The Auger electrons start with narrow energy distributions, but they soon lose energy as they pass through materials. Auger electrons fail to emerge with their characteristic energies if they start from deeper than about 1 to 5 nm into the surface. Thus, Auger analysis is surface specific. Auger electrons that escape from deeper in the sample contribute loss tails to the spectrum background. The secondary and backscattered electrons have broad energy distributions that tail into the Auger region. The sum of these interfering signals is much greater than the Auger signals themselves. Auger display algorithms use differentiation to enhance the signal relative to the interferences.

Auger electron spectroscopy provides compositional information for many types of surfaces, thin films, and interfaces. Typical samples include both raw semiconductors materials and finished electronic devices. Many of these devices consist of thin layers. For example, Auger can distinguish between Si, SiO2, SiO, and Si3N4 in a 10 nm layer on a silicon wafer.

Auger analytical volumes down to about 3e-19 cc are possible. It is common to analyze individual small features within finished or partly finished electronic devices. Many other analyses rely on this microanalytical capability for characterizing heterogeneous materials. For example, Auger analyses of failed materials are common. The fractured surfaces of a broken piece of steel might be examined for the presence of unusual elements such as lead at metal grain boundaries. In contrast to Auger, less finely focused microanalytical techniques provide only average concentrations from larger analytical volumes.

Although widely useful, Auger does have limitations. It cannot detect hydrogen or helium. It does not provide for nondestructive depth profiles. It requires that samples be small and compatible with high vacuum. Nonconducting samples sometimes charge under electron beam bombardment and simply can’t be analyzed. Elemental quantitation by Auger depends on instrumental, chemical, and sample related factors.

Qualitative analysis by Auger electron spectroscopy depends on identification of the elements responsible for the various peaks in the spectrum. The Auger electron energies are widely tabulated for all elements in the periodic table. The figure shows the most useful Auger peaks in the KLL, LMM, and MNN parts of the spectrum as well as higher transitions for elements above cesium. The red dots indicate the strongest and most characteristic peaks and the green bands indicate the rough structure of less intense peaks.

Auger electron peaks are proportional to elemental concentrations. However, it is seldom possible to measure concentrations from first principles. Several instrumental factors influence Auger peak heights. These include primary beam energy, sample orientation, and the energy resolution and acceptance angle of the analyzer.

The chemical states of elements in the sample also influence the process of elemental analysis by Auger. Both peak intensity and peak shape vary, especially as a function of oxidation state. Changes in peak shape are important when the quantitation proceeds from a differential data display.

Sample heterogeneity must be considered for quantitative analysis. The sample should be homogeneous in the lateral directions relative to the primary beam diameter for measurements to be accurate. The Auger signals arise from an analytical volume that depends mainly on the diameter of the primary beam. If the beam is narrower than the scale of heterogeneity, then meaningful analyses can be made on islands within a sample. The thickness of the analytical volume is small because Auger is highly surface sensitive. Therefore, the analyzed surface may not be representative of the bulk material. For example, many metal samples acquire thin oxide coatings when exposed to air. In spite of the above considerations, quantification of elemental concentrations is possible in cases where relative sensitivity factors have been measured in the same sample matrix.

A typical Auger analysis requires quantification of major and minor elements. This concentration range is consistent with Auger analytical detection limits (1 to 0.01 %). (In contrast, SIMS usually provides trace element quantification while the major elements remain essentially constant.) Since concentrations of all elements, (including the matrix) can vary in an Auger measurement, it is necessary to express concentrations as percents (CE%) normalized relative to the sum of all others.

The next part of the procedure uses the same logic as SIMS RSFs.

Substituting the right side of the RSF equation for concentrations (CE and CX) in the top equation (and eliminating the matrix current terms from the numerator and denominator) give the following equation. This format is the most common method for elemental quantification by Auger. However, it should be noted that Auger RSFís are often reciprocals of those defined here. (They must be incorporated by division into the Auger signal rather than multiplication.)

To analyze samples in depth, Auger instruments incorporate ion beam sputtering to remove material from the sample surface. One cycle of a typical depth profile consists of sputtering a small increment into the sample, stopping, measuring relevant portions of the Auger spectrum, and using the equation for elemental quantification.

Would you like to learn more about Auger Electron Spectroscopy (AES)?

Contact us today for your Auger Electron Spectroscopy (AES) needs at +1 800-366-3867 or please complete the form below to have an EAG expert contact you.