Particle Induced X-Ray Emission (PIXE) is the measurement of X-rays emitted from a sample due to high-energy ion bombardment. Several kinds of excitation beams produce X-rays with energies characteristic of the target elements. Photon excitation (by X-rays) gives rise to X-ray fluorescence spectroscopy. Electron excitation in a scanning electron microscope or an electron microprobe provides energy dispersive or wavelength dispersive X-ray spectroscopy (depending on the X-ray dispersion and detection method). Charged particle beams of He2+ or H+ lead to PIXE spectroscopy. In all three cases, the excitation beam removes a core electron, and X-rays are emitted with specific energies when outer shell electrons change state to fill the inner shell vacancy. The X-ray energies emitted are independent of the excitation process but are characteristic of the elements present.

This accessory is useful for heavy element identification on RBS instruments. These heavy elements may have only small differences in RBS backscattered energies, due to their similar masses, but they can have distinct differences in PIXE spectra. PIXE has several advantages as an analytic technique. It is non-destructive and offers signal levels similar to its electron beam counterparts, but it has better signal-to-background ratios. The background in electron spectroscopy arises from bremsstrahlung, which is largely absent because He2+ or H+ ions, even at PIXE energies, have much lower velocities than electrons. Another advantage over electron induced spectroscopy is that, like RBS, PIXE works with insulating samples. 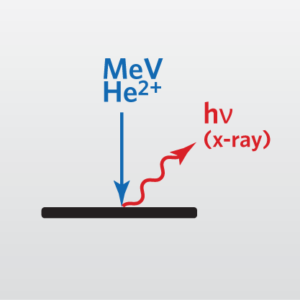 Would you like to learn more about using Particle Induced X-Ray Emission (PIXE)?

Contact us today for your Particle Induced X-Ray Emission (PIXE) needs at +1 800-366-3867 or please complete the form below to have an EAG expert contact you.