What is the relationship between Auger analysis and EDS analysis?

Home » What is the relationship between Auger analysis and EDS analysis?

Both Auger Electron Spectroscopy (AES) and Energy Dispersive X-ray Spectroscopy (EDX / EDS) are used for elemental analysis of small localized regions by exposing the  sample to a focused electron beam. Although both are very useful techniques, the type of signal detected is different, and the information depth of each measurement is quite different.

Since the escape depth of Auger electrons is low, it is possible to obtain the depth distribution of elements of interest by sputtering the sample with an ion gun (e.g. Ar+) and obtaining Auger spectra  alternately in between sputter steps. In contrast to Auger analysis, EDS analysis involves the detection and measurement of X-rays that are characteristic of the species present. The depth of escape of these X-rays is about 1um, which is more than  100 times deeper than the  Auger electron escape depth. Please note that the EDS information depth is variable, particularly with respect to the electron beam energy.

Auger analysis is generally more suitable than EDS analysis for the analysis of very thing surface layersd, particles or contaminants, e.g. 50 nm thick, or less. If EDS was used for such an analysis, it is very likely that the spectra obtained would contain more information from beneath the surface layer or feature of interest, rather than from the surface of the sample itself. This convolution of surface information with intense signal from beneath the surface makes it difficult to fully and unambiguously identify thin surface contaminants, particles or layers. As a general guideline, EDS is most suitable for measuring foreign matter and local areas of 0.5um  thickness or greater.

In Auger analysis for, an information depth of about 10 nm or less can be obtained from a small spot irradiated with the incident electron beam. On the other hand, in EDS analysis, the characteristic X-rays come from a much large volume, that  depends on the acceleration energy of the electron beam. The  information comes from a much larger volume (about 1um3) than the irradiated spot that the X-ray actually hits. This can be an advantage for EDS in some cases (particle/layer/feature sizes of 0.5um or larger) and an advantage for Auger in other cases (smaller features and thin films).

Observation of a particle and elemental analysis by SEM-EDS

SEM image and EDS spectrum (using a low energy 3 keV electron beam) of 0.3um Al particles on Si substrate. It can be seen that the foreign material is composed of Al and O.
In normal EDS analysis, particles with a size of 0.5um or more are targeted. 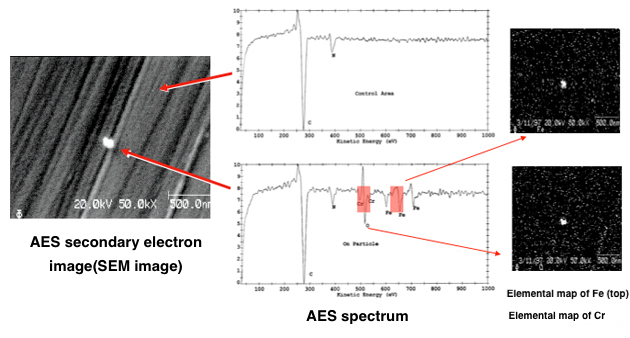 Analysis of a particle with a size of about 100nm. It can be seen that the particle is composed of Cr and Fe.In this case, EDS would not be suitable since the small size of the particle would mean a lot of signal would come from the surroundings and not from the particle itself.

Would you like to learn more about Auger analysis and EDS analysis?

Contact us today for your Auger analysis and EDS analysis needs at +1 800-366-3867 or please complete the form below to have an EAG expert contact you.