Vertical cavity surface emitting lasers (VCSELs) are everywhere.  The VCSEL has several advantages over its edge emitting cousin, such as higher modulation speed and symmetrical emission pattern. However, these advantages come at the expense of a more complex device structure which can have over two hundred layers which must be grown with a high degree of composition and dopant-level accuracy and precision. That is where secondary ion mass spectrometry (SIMS) can be of invaluable assistance to the epitaxial layer grower.

In this webinar you will learn:

The structure of a VCSEL is comprised of GaAs mirror layers (called Bragg Reflectors) above and below the active lasing region of the device.  The composition of the individual layers of both mirrors can range from Al0.1 Ga0.9 As to Al0.98 Ga0.02 As.  We will show accurate measurements of all these compositions.  We will also show accurate measurement of the graded composition of the cladding layers on either side of the active region as well as the p-type and n-type doping profiles in the cladding layers.  The structure and doping within this region all affect the lasing efficiency and wavelength so accurate characterization of this region is important to the epitaxial wafer grower and to the end fabricator of the finished VCSELs.  An example will be shown of performing SIMS on a finished, packaged VCSEL for structure, dopant and impurity analysis.

But VCSELs, like all semiconductors, periodically suffer failures.  A case study of VSCELs failing in a very large, high-energy physics detector will be shown.  The webinar will show how STEM can be used in both plan-view and cross-sectional view to isolate the cause of these failures. 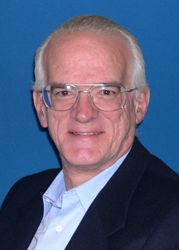 From 1973 to 1987, Dr. Charles Magee was a Member of the Technical Staff in the Materials Characterization Research Group of RCA Laboratories in Princeton, New Jersey. His work dealt mainly with the trace elemental analysis of thin solid films by means of SIMS. In 1987 he left RCA to co-found Evans East in partnership with Charles Evans & Associates. At Evans East he held the position of Director of Analytical Services. In that position he advanced the SIMS technique by pushing for ever lower detection limits and higher depth resolution in III-V structures such as heterostructure bipolar transistors. In the early 2000’s he was instrumental in developing the concept of correcting sensitivities in III-V and SiGe structures based on the matrix composition which later proved to be essential in the accurate characterization of VCSELs. In 2005, Evans East was part of the formation of the Evans Analytical Group (EAG, Inc.). Dr. Magee was a founding stockholder in the company until EAG, Inc. was purchased by Eurofins in 2017. He presently serves in the position of Chief Scientist of the Materials Sciences Division of Eurofins-USA.